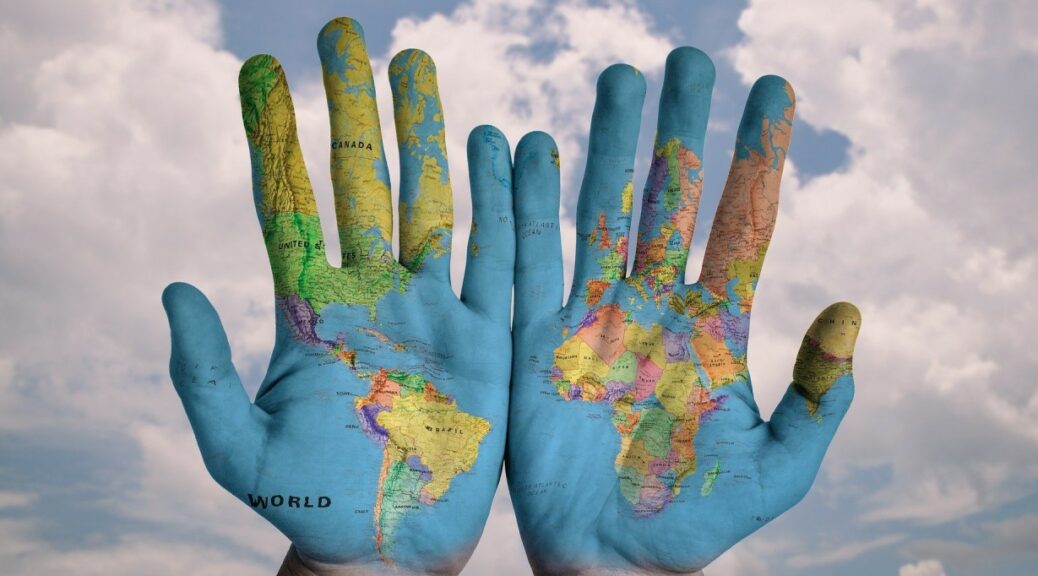 The Covid-19 quarantine has catapulted humanity into a new phase of global awareness through internet-based interaction. Professional and community based online communication has become a literal life stream.

Sadly, prior to the pandemic, we had already started to see a push towards cultural isolationism as a knee jerk rejection of globalism by the fearful.

Insular societies are often formed by living in an isolated location or in a group of people that resist exposure to new ideas. It can be a side effect of poverty with restricted travel or movement. Fear will often derail travel or reflect a lack of interest to exposure to other nationalities, languages or cultures.

Excluding the East and West coasts of the United States, 60% of Americans do not have a passport. Since the early part of the 20th century Americans have rarely traveled beyond 50 miles from where they were born! Our only exposure to other cultures can be limited to television, movies or social media, none of which reflect reality.

Unfortunately this can create a fear of new experiences, fear of travel, or worse, gross stereotypes of people. A perfect example is how Muslims are portrayed as terrorists or as dangerous individuals. Imagine if the entire world thought all Americans were Jehovah Witnesses?

Geographical size can also be a major contributor to an insular culture. California is the size of 5–7 European countries and is actually smaller than Texas or Alaska. Americans with only two weeks vacation a year barely have enough time to explore their own state, much less travel to another country.

In comparison, while living in Germany, I could drive to Holland or Belgium in 5 hours, Austria in 7 hours, France in 10, and Italy in 13. In those few hours I was exposed to multiple cultures, languages, food, and people. In Switzerland I was astounded to hear preschoolers speaking multiple languages from their exposure to people from other countries.

Now imagine each US state as a different country. It’s easy if you try and imagine someone from Boston talking to someone from Alabama, Texas or California. It would sound like we were all from different planets. There is a reason for that too.

As a melting pot of people who immigrated here from around the world, we came here despite the First Nations and Mexican Nation people that already were established here culturally and physically. Isolationists choose to forget that we are a country of immigrants. Their racism and xenophobia are a response to not being able to recognize the original cultural heritage in another person. This is what we now identify as “cultural intelligence”.

Professor David Livermore is an expert in cultural behavior. He is a world-renowned writer and lecturer on Cultural Intelligence. He helps train police departments to determine whether someone from a different cultural background is exhibiting behavior that is a threat or a culturally derived emotional response to a crisis.

To understand someone’s character or behavior, it helps to understand if they are from an Affective or Neutral Cultural background. Affective cultures are highly expressive in their communications and feelings. They talk loudly when excited, are very animated, enthusiastic, spontaneous. They are also more emotional and use their intuition in their decision making process and will often exaggerate to make a point.

Neutral cultures emphasize controlling their emotions or a non-emotional response to situations. They are more likely to disguise what they are thinking or feeling which can lead to unexpected outbursts. They can speak in a monotone, show little emotions, and expect others to stick to the point on specific, predetermined topics. To interrupt someone is taboo and punishment often includes being given “the silent treatment”.

Culture is not only about national culture. There are also industry cultures and corporate cultures.

In his Teaching Company course, Customs of the World: Using Cultural Intelligence to Adapt, Where ever You Are, Professor Livermore analyzes cultures beyond Affective and Neutral behaviors.

Cultures (based on academic research across 60 countries) are also identified by;

The arts can be one of the least fearful ways to open ourselves up to other cultures. If travel and finances are restricting our global curiosity about other cultures, we can learn much by watching videos or travel blogs on YouTube from expatriates who live in those places.

Begin with one or two countries. Perhaps the countries your family originated from or a country you have always wanted to visit. If you really want to stretch your personal boundaries, do this with a culture you have no interest in.

Research your country of interest’s most famous painters, singers, play-writes, and film directors. Who were their bestselling authors? Find out and then read English versions of those books. Who are their famous chefs and what foods do they eat and why? What is your chosen country most famous for? What were their gifts to the world?

Exposure to other cultures has benefited humanity much more than isolation. It may not be immediately obvious but history has provided many examples of this.

Prior to the Renaissance, only priests and monks could read. Much of Europe lived in filth and isolation until the Christian Crusades. History shows us these solders were not Christians at all, but paid mercenaries to go into Spain and kill off the Moors who had settled there by the Christian church.

When the soldiers arrived in Cordoba they found a place like no other. The Moors had plumbing, in-house baths, and communal fountains. They cultivated fruit trees and had more libraries than in all of France combined!

“Their society had become too sophisticated to be fanatical. Christians and Moslems, with Jews as their intermediaries and interpreters, lived side by side and fought, not each other, but other mixed communities.” (Cleugh, 1953, p.71).

While the rest of Europe lived in fear and superstition, Arabs had traveled the globe and brought books and knowledge from every location.

Thanks to the Moors, we were gifted with our knowledge of medicine, botany, geometry, astronomy, mathematics (including the concept of zero), eye -glasses, and the use of brass type for printing, just to name a few.

The Moors also gave us the concept of dressing for the seasons, using glass and silverware to eat, and eating meals in more than one course.

These were the gifts of Arab Muslims to the West. Their culture was so far ahead of the rest of the world that Christian and Jewish scholars had to come from all around Europe to translate their books. It took them 300 years! This is what came to be known as the Renaissance or “great rebirth”.

When we travel we learn more about ourselves than the world. To get past fear and isolationism, we must focus on what makes us the same rather than what is different. We all want a safe place to live, enough food to eat, and for our families to be safe. We all laugh and we all cry.

We all love. When we hear or read any disparaging statement against another culture it is important to ask ourselves two questions. What is it they fear and Who will benefit from creating an Us versus Them situation?