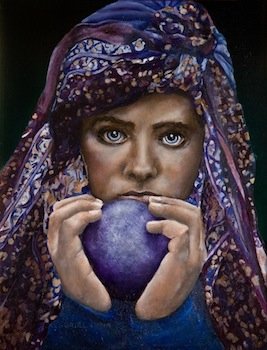 How many times have artists been told that our art is protected by copyright as long as we sign it? Perhaps you’ve heard it will be safe if  it is signed with a copyright symbol? A favorite urban myth is that we are legally protected if we send the image by certified mail to ourselves and leave it unopened. None of these are true if your art has been scanned and used by a corporate entity.

Unfortunately, we live in a time where images are lifted and manipulated and passed off as original daily. The movie “Avatar” was the first time I was actually distracted by the imagery I could easily identify in spite of the software used to obfuscate what was obvious to the visually literate.

I am not a copyright attorney. As a fine artist for more than three decades I can only share my experience when one of my painting images appeared on the Microsoft Home Page without my permission.

Imagine hundreds of thousands of people seeing your art every day on the Internet. Now imagine that instead of your signature under the painting, you saw the name “Corbis” written under it. This is what happened to me. The web was still relatively new at the time and most people had no idea that “Corbis” was an image licensing company. It looked more like the artist’s name.

The Seer is my most recognized painting. It has been in print nearly non-stop since it was first painted in 1988. The model was the artist Gage Taylor’s daughter from his first marriage. Her name is Deva Taylor. I designed the costume and used an Amethyst from a collection of quartz spheres I use to own.

Around the time Gage died in 2000, people began e-mailing me about an image that looked like one of my paintings on the Microsoft Home Page.

Instead of my name and copyright notice it said, “Corbis”. A yellow filter, a Tarot card, and a candle were overlaid with computer software. At the time I wasn’t fussed about the image being used. I did mind, however, that it looked like someone named Corbis had done the image.

I contacted Microsoft and said, “This is my oil painting. I can tell you who the model is; show you my photos and preliminary sketches, the amethyst and even the Oscar del la Renta Scarf. You don’t need to pay me, just please put my name under the image.” Microsoft blew me off and to contact Corbis.

Next I contacted the licensing division of Corbis. I said, “This is my oil painting. I can tell you who the model is; show you my photos and preliminary sketches, the amethyst and even the Oscar del la Renta Scarf. You don’t need to pay me, just please put my name under the image.” Corbis blew me off too.

Every attorney I contacted was afraid to take on Microsoft. (Apparently Microsoft retains a huge team of attorneys to frighten people off).

A friend and patron was a recently retired successful attorney. He began to advocating on my behalf with some of San Francisco’s major law firms. He located an excellent first amendment attorney. For legal reasons I cannot mention her name.

I will say she was the only lawyer at the time that had ever fought Microsoft on copyright violation and won. As an attorney, she was hesitant to take on Goliath a second time.

Fortunately, whatever one may think of my art, I look very good on paper. I mention this only because it was a huge contributing factor to my case. I had just been nominated for the 4th time for International Woman of the Year as well as for Who’s Who of American Art, Who’s Who of American Women, and for Outstanding Achievement in the Fine Arts (a category of The Twentieth Century Award for Achievement).

As a courtesy, the attorney made a call to Microsoft on my behalf. The gist of their response was, “we’re not accountable to some woman artist”. Fortunately, it was their arrogance that made this particular woman attorney angry enough to represent me.

Microsoft and Corbis guarantee the copyrights of their images in their contracts and were instantly accountable. So it was a photographer, not Microsoft or Corbis that had actually scanned one of my images, manipulated it, and deceptively passed it off as his own.

We settled. Most of the money went to my attorney and expenses, and I did not get rich. I had to sign a statement saying Microsoft had done nothing wrong and that I would never say how much I was paid.

Suing over copyright violation was never about money for me, but about seeing a noble and difficult profession increasingly marginalized by tech. Without artists video games would not exist and yet “talent” is consistently the lowest paid jobs in the industry. When behemoth tech companies are required to participate in percentage for art programs, they add insult to injury by paying for graffiti installed indoors. It is not to be young and contemporary. It is a value judgement against art and its place in the tech world.

I am sharing this experience because it was eye opening. Although as artists are told we own the copyrights to our work by rights of doing it, this is not quite true. Unless you fill out the actual paperwork and pay the fee to the US Copyright Office, you cannot sue anyone for violation.

Artists fear the costs of registering their artwork. Although it is only $35.00 per image by mail and $45.00 online, if you create dozens of images your expenses can quickly accumulate. What many artists do not realize is that you can group copyright under one fee if you are producing a catalog or a book under a theme. With the technology we have today you can print an inexpensive catalog or calendar at Fed Ex/Kinko’s and pay a single copyright fee.

I was fortunate to actually have registered it, although it was a few years after I had finished the painting. This made Microsoft only financially responsible from the actual date I received my copyright; not from the time the painting was signed.

Another corporate snare (designed to avoid responsibility) was to imply I did not have a “model release”. Guess what? I did! Years ago I paid a copyright attorney $88.00 to write a professional model release. It was one of the best investments I have ever made, and was tax deductible. (You can now buy books with legal contracts for artists ready to go). The point I’m trying to make is, all I really wanted was my name identifying my own painting. It says so much about our culture when a tech company that pays out millions to charity chooses not to pay a small licensing fee to a female artist. They chose to remove the image from their site.

Many young artists feel uncomfortable using contracts. Caroll Michels sums it up perfectly in her book, How To Survive & Prosper As An Artist, Selling Yourself Without Selling Your Soul. “…most artists who resist using contracts are struggling with the issue of psychological leverage and erroneously believe that they have not achieved a level of recognition or success that permits them to ask for what they want. Requiring art dealers, art consultants, exhibition sponsors, and clients to use contracts is not a sign of mistrust. Rather, it shows that you take yourself and your work seriously,, and you are demonstrating good faith in wanting to maintain a smooth working relationship by ironing out in advance any possible conflicts or misunderstandings.“

My experience with Microsoft has made me think hard and often about the disassociation of images from their creator. In a time where smartphones give us immediate access to a camera and video, the currency of the image has been devalued. They are too easily accessible. The concept that photography is a skill or an art is lessened. People endlessly post mundane images on social media sites. We are increasingly forgetting boundaries or that we have dishonored the rights of others. It’s maddening when I see an unidentified painting on Pinterest, when I know the artist but there is no way for me to add that identity. Using Google Image or Tin Eye to identify artwork is easy and to not do so irresponsible.

Social media posts are not the only violations of copyrights. Many artists are not any better. Have you been told if you change 25% of an image you are not violating someone else’s copyright? This is false. Although the copyright laws say the image has to be transformed, it is the purpose behind your change versus the original that will be the topic of discussion in court.

We should never assume anything created prior to the 1930’s is in the public domain either. If you do not create your own sketches or photographic references, images can be licensed for as little as $10.00. We should not do this to avoid a lawsuit, but because it is in alignment with universal law.

On this note, a tenth of my life has probably been spent in museums looking at art. I am a bit embarrassed to admit that in the early days I rarely paid attention to the artist’s name accompanying the painting. It was the imagery, colors, and technique that held me. Only when I started to remember the name of the artists I admired that the art public started to remember my name. Apparently we do get what we give.

(Note: This was originally a much longer article. I have divided it into two parts for easier reading. Part II is called, Dolls Gone Wrong: The World’s Warped Perception of Women in the Arts).

Artwork: The Seer, Oil On Canvas, ©1988, by Uriél Dana. This image has been published as a card in 12 countries on 4 continents.