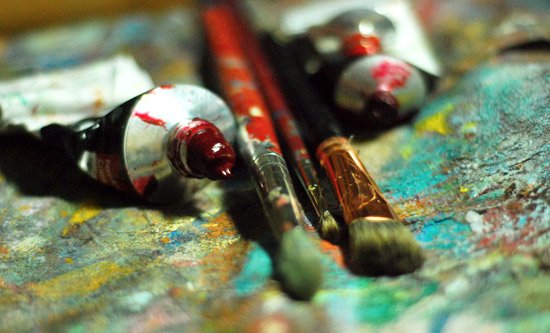 The motivating force of the Impressionists was the “truth to nature” philosophy of the Barbizon School (A group of painters working around Barbizon, France roughly around 1830).

There was a real division between realism and naturalism at the time. The academies had become very tight; exhibiting work that had become extremely idealized & manipulated. The Barbizon believed in drawing quickly and painting on site. They were interested in capturing movement of light and atmosphere.(Example: Camille Corot).

To put it today’s context, the Academy would be like a modern day photo corrected with Photoshop; no wrinkles, altered skin and weight, etc. Using the photo analogy, the Barbizon School would be like looking at a real photo taken on film in real time.

Like the Barbizons, the Impressionists were obsessed with light but they had an advantage. At this time we see the introduction of gesso to prime a canvas. This gave a white surface to paint on instead of the brown rabbit skin glue foundation. (Painters today have started to use non white palettes because it brightens the colors too much. Imagine how paint on white looked like in the 19th century with this revelation).

Another big change was the invention of ready made paints. Tubes could be purchased for easy transport.This was life altering for an artist that liked to paint outdoors.

Another invention that made the Impressionists possible was the invention of the “flat brush”. Unlike the former “round brushes, flats were stiff hog-hair and allowed for the thick application of paint. Short and long flats helped invent a broad, long stroke called the “tache”. Flat brushes also allowed them to use what is called broken color techniques to capture light by laying individual brush strokes side by side.

Impressionist art was hated during its time. Without the marketing skills of French art dealer Paul Durand-Ruel (1831-1922) we may never have heard of Monet, Pissarro, Degas, Renoir, Sisley and Manet. The exaggerated color temperatures were seen as garish and the technique messy. It was akin to how psychedelic colors look on the internet today. We have forgotten what natural color looks like because everything is so “tweaked” by eyes made lazy by film and effects.