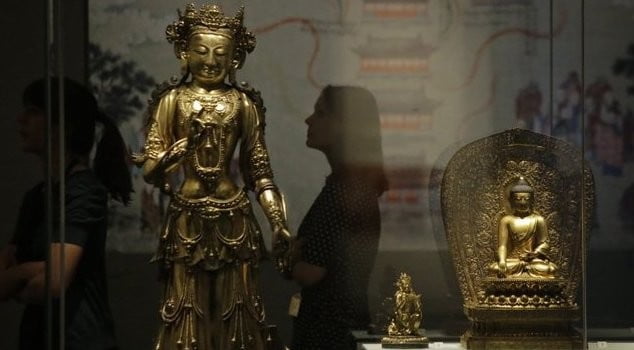 The Eighty-Four Mahasiddhas are historical figures that lived between the eighth and twelfth centuries that achieved great accomplishments. A more western definition is that a “siddha” is someone with magical powers and “maha” means above all others. How they achieved these abilities came to be known as the Buddhist Tantras.

Commonly known as “siddhis”, these psychic and spiritual abilities have often been dubbed “supernatural”. They are developed through an oral tradition of teaching in addition to an extended meditation practice.

In the early Nyingma tradition (one of the four Tibetan Buddhist Practices), the “Highest Yoga Tantras” or anuttarra, carry a sword in their right hand that could grant the eight great powers or psychic attainment. These include psychic sight or clairvoyance, invisibility, transmutation of matter, translocation and multiple manifestation, the sword of discriminating awareness, the ability to traverse all realms of existence, ability to fly through the sky, levitation, and immortality.

Supernatural abilities are not what made the eighty-four mahasiddhas special however. Using the teachings of the Buddha, these individuals gained enlightenment during their lifetime. They offered a path for others to follow so they too could achieve success in their Vajrayana practice. (Vajrayana is a path that uses ordinary experiences into an opportunity for awakening spiritually).

Let me reframe this concept in a modern context: In 1995 I flat-lined during a surgical procedure. I found myself in 16th century Bengal India, dying from a fall down a flight of stairs. The details of that out of body journey were life altering for me. I began dreaming in Sanskrit and Chinese; could understand the lyrics of any language in song; could suddenly play a tamboura; chant in mantra; and I could smell when people were about to die. I also started painting miniatures, Left-handed. (I am right handed).

In the Vajrayana tradition I would probably be renamed Udana (which is how I sign my paintings), a combination of my first initial and last name that takes on a third, synergistic meaning. The Udana in tantric practice is the ascending energy current. It means, “to awaken”. If I were to write a self help book of those experiences or teach privately in workshops they would be known as “the Udana Tantras”.

The eighty-four mahasiddhas helped bring about the growth and success of the Tantric tradition, particularly during the Pala dynasty. The supernatural stories of the mahasiddha helped establish many Buddhist lineages and traditions. For example, there is a strong connection between the Mahasiddha “Telopa” in the Kagyu sect of Buddhism and “Virupa” in the Sakya sect. Telopa is known as “the great renunciate” because he gave up the fortune he made as an oil merchant for spiritual liberation.

Made up of eighty men and four women, there is always a pattern to their stories. Their mahasiddha name is rarely the one they were born with. They are always identified by caste, which can be either low or high. A life crisis occurs through deep discontent or an inability to see their way out of a problem.  They meet a guru or teacher, usually in a place where they are confronting their fears, which more often than not is a cemetery.

(Cemeteries are traditionally the symbol of  “samsara” or those caught in the cycle of suffering) in both Buddhism and Hinduism. After years of following strict practices given by their guru, enlightenment follows and the mahasiddha inspires many people on their own path of enlightenment.

Although there is a pattern to the stories, that’s where the similarities end. The translation of their names alone shows the sheer variety of characters. There is Jayanda; the Crow Master, Lilapa; the Royal Hedonist, & Nirgunapa; The Enlightened Moron. There are two headless sisters (Kanakhala and McKhala), a gambler (Tantepa), and a compulsive liar (Thaganapa). There are kings (Campaka, Kankana), a prince (Nalinapa), and a mad princess (Laksminkara). Let’s not forget the pastry chef (Picari or Pacaripa), a glutton (Sarvabhaksa), a fearless thief (Khadgapa), and a lovelorn widower (Kankaripa). There is Godhuripa, the bird catcher, and Udhilipa, the flying birdman.  There is also a mahasiddha named Darika who was a bit of a slave to prostitutes that learned to fly on his own accord.

Dharma Publishing has published a book on the lives of the mahasiddhas by Abhayadatta. Translated into English by James B. Robinson, Buddha’s Lions; The Lives of The Eighty-Four Siddhas offers insight into the Vajrayana.  Robinson tells of when Buddhism passed into Tibet it was vital that those who shared their lineage embody the teachings of that lineage. In this way each became a Buddha himself and the doctrine became a living lineage.

Robinson goes on to tell us how the Buddha taught that wisdom comes from both knowledge and practice. ‘It is not enough to receive the oral tradition or to just memorize the data. One must sit and absorb it. The knowledge produced in meditation then becomes the culminating achievement affecting the transformation that leads to liberation.’

One example is Laksminkara, a.k.a. “the mad princess”. Her brother was a king that ruled over a quarter of a million cities in Uddiyana. Laksminkara was enormously wealthy and extremely educated. She had studied the tantras and been taught by the great siddha Kanibala himself.  Her brother arranges a marriage for her to the future King of Lanka and off she is shipped.  It wasn’t looking too good for her when she arrived; most of the people were not Buddhists. Laksminkara wasn’t even allowed to enter the king’s palace because the stars were unfavorable.

While waiting in town the prince’s entourage arrived from a hunt carrying a huge amount of meat. When she found out the prince was responsible for the death of all of these animals she was repulsed. She knew she could not marry such a man. She gave away all the wealth and jewelry she had brought as her dowry to the people, and gave instruction not to be disturbed for ten days. She cut off her hair, stripped naked and rubbed ash all over her body. The king tried to get her help and medicines for her to come to her senses but Laksminkara would not have it. Eventually she escaped and went to live in a graveyard for 7 years until she attained siddhi.

A sweeper of the king made reverence to her and she became his teacher. Once, when the king had lost his way he saw magic lights and dakinis dancing in the cave where Laksminkara slept. At first he thought she was crazy. He returned to the palace but felt so much light and faith, he was compelled to return. Honoring her with the reverence she deserved, he asked for her to be his teacher. She told the King his sweeper was her student and he must honor the sweeper as his teacher as he would become an auspicious friend.  The challenge would be for the King to find “the right sweeper” as there were so many. Laksminkara told him to look for the sweeper giving food to the people at night.

In the end, the King found the right sweeper. The king put him on a throne and asked for instructions. He received spiritual transmission from him, and the sweeper and the princess manifested many miracles for the people of Lanka.

Parts of this article were originally from a piece I wrote in 2009 for the Dharma Publishing website, a division of the Nyingma Institute Buddhist Center in Berkeley, CA. They offer courses on many aspects of Buddhism and I was lucky enough to enroll in one of its Art in Tibetan Thangka classes. It is a rare and comprehensive course on the subject.

Uriél Danā has been a Professional Artist, Curator & Arts Writer since 1983 in addition to being an invitational Arts Ambassador for the US State Department. She became a Master of Tibetan Dream Yoga from age 9 to overcome a sleeping disorder under the training of a Mongolian monk on the North side of Chicago. She lives in the San Francisco Bay Area.